The photograph depicts a stone carving in the shape of a stegosaurus at the ancient temple of Ta Prohm in Cambodia. These carvings, which were created during the Angkor era, are thought to be about 900 years old. The stegosaurus, a type of herbivorous dinosaur, has a series of plates running down its back, as well as sharp spines on its tail.

The presence of a stegosaurus at Ta Prohm is a mystery that has puzzled archaeologists and historians for centuries. The Khmer civilization, which flourished in the region from the 9th to the 15th century, had no known contact with dinosaurs. So how did this ancient civilization come to depict a creature that lived millions of years before their time? Some believe the carvings may have been influenced by the ancient Khmer people’s exposure to fossils.

Regardless of the true meaning behind the stegosaurus motif at Ta Prohm, it remains a fascinating mystery that adds to the allure of this ancient city. As visitors explore the ruins of Ta Prohm, they can’t help but wonder about the stories and meanings behind the mysterious dinosaur carved into the stone. 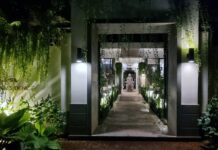 Mr. Ban – The Tuk Tuk Driver who made a Difference A Tree at Ta Prohm: A Monument to the Past

On a Harley to Hatta, UAE Took this photo on my way back from an exciting trip around Theni (on the border of Tamil Nadu and Kerala) and Thekkady doing...